Ferguson: A History of Success

Ferguson is a company committed to the growth of its business and its people.  Founded in 1953 by Charles Ferguson, Ralph Lenz, and Johnny Smither, the company began with a modest $165,000 starting capital. Ferguson’s first two locations opened in Colmar Manor, Md., a suburb of Washington D.C., and Birmingham, Ala., for the purpose of servicing smaller plumbing contractors. In 1954, Crossroads Supply opened in Alexandria, Va., and became the umbrella company for the three locations. Peebles Supply was opened in 1959 in Hampton, Va., by David Peebles, who became the company's second president in 1969 and changed the name of the managing company to Ferguson Enterprises Inc., in honor of the company's mentor.
Under Peebles' leadership, Ferguson grew to be an industry leader by idealizing the American dream of owning and operating a business. Ferguson managers who started locations under their own names were truly entrepreneurs, structuring their businesses based on local market demands. Peebles's instituted Ferguson's Training Program, which was designed to attract the best and brightest the workforce had to offer. Peebles' philosophy of aggressive expansion and his vision of what we could become served Ferguson well during this period of growth. By 1982, when the company was acquired by Wolseley plc, Ferguson had 76 locations in 11 states and $142 million in annual sales. Wolseley's financial strength contributed to Ferguson's phenomenal growth in the next decade with the addition of 13 new states, bringing the total number of locations to nearly 200.

In 1989, Charlie Banks, Ferguson's first official trainee, became the company’s second President and CEO. With Banks' guidance, Ferguson grew from $606 million in sales to over $3.3 billion and had more than 500 locations in 38 states. In May 2001, Banks took over as Group Chief Executive of Wolseley, Ferguson's parent company, and Claude "Chip" Hornsby stepped in to guide Ferguson as President and CEO. In 2005, John Stegeman was appointed Ferguson's President and CEO, as Hornsby transitioned to Wolseley's Group Chief Executive after Mr. Bank's retirement the following year.

Frank Roach was appointed CEO for Wolseley’s North American operations in December 2005, and in August 2009, he assumed additional responsibilities as CEO of Ferguson. In the late 2000s, Ferguson’s growth began to slow as the recession hit traditional construction markets. Ferguson weathered the challenge by renewing its focus on efficiency, with key oversight by Roach and his leadership team. The focus on discipline helped prepare Ferguson for the coming period of immense growth and record-high profits.

After nearly 41 years with Ferguson, Roach retired in July 2017 and passed the reins to longtime Chief Operating Officer, Kevin Murphy. Under Murphy’s guidance, Ferguson continues to focus on developing its associates and providing unrivaled customer service - a proven strategy that will allow Ferguson to continue to meet its goals for the future.  The company's diversification across multiple business sectors, including residential plumbing, waterworks, HVAC/R and commercial/industrial supply, have positioned the company to succeed, regardless of the economic climate.

Ferguson is a company that has proven it can adapt to the times.  The company's rich history and second-to-none customer service make it an industry leader, but its associates make Ferguson the company it is today. 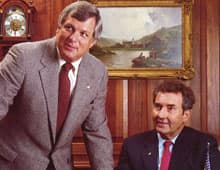